STORIES FROM MY TRAVELS

After a lot of nagging, I managed to convince my mother to tag along on a trip with me to Belgium. Our six-day trip included two days of travel, four incredible cities, and more waffles, frites, and beer than you could imagine. Through Expedia, we were able to book our flights and hotel for roughly $750 a person! It was my first time flying WOW Air, but that’s a whole different story that I will review separately. We stayed in Brussels at the Augustin which was located about 10 minutes from Grand Place. The hotel itself was clean, well decorated and equipped with helpful staff. When you book through the hotel itself, a breakfast buffet is included. Either way, the hotel is remarkably well priced at less than $100 a night.

Upon landing in Belgium, we opted to take a taxi to our hotel to treat ourselves after a ~rough~ flight. With check-in hours away, we dropped off our bags and headed for coffee and Grand Place. We spent the afternoon exploring all of the side streets, shops, and cafes that the area had to offer. And of course, we had to enjoy our first Belgian beers. Whenever you order beer in Belgium, a small snack of peanuts or pretzels are brought out for you to enjoy while sipping your beer.

On our first full day, we headed to central station to catch a train to Antwerp. The trains can be a little confusing if you aren’t familiar with the routes because while a train may stop in a given city, it won’t necessarily say that city on the large board of departures. I asked a worker each day to make sure that I was correct with the routes, and they were always helpful! Antwerp’s Central Station is a beautiful tourist destination in its own right, but we kept the day moving. We walked down the main shopping street of Meir towards the Grote Market. We briefly stopped outside the Rubenshuis but decided lunch was more important. I definitely regret not going inside. Lunch and drinks in Grote Market were met with wind and a slight rain. The Cathedral of Our Lady was under construction so we walked toward the Het Steen fortress… WHICH you cannot go inside. This was a major disappointment for someone who is determined to see every medieval castle/fortress in Europe. At this point, my mother had enough walking and needed a siesta. We took a cab back to the train station and headed back to Brussels for a nap at our hotel.

The hype is real. On our second day, we headed to Bruges which is over an hour train ride away. The first thing we did was hop on a canal boat tour (8€ each for 30 minutes). I genuinely think that if you skip the tour, then you haven’t seen Bruges. Why does the city look like its stuck in time? The city was once a very prosperous and rich trade center, but business later moved to Antwerp leaving Bruges stuck in the 1500s. After the tour, we headed to see the Bruges Madonna at the Church of Our Lady. For those who don’t know (I didn’t before researching Belgium), The Brugse Madonna is the only sculpture by Michelangelo that is not in Italy. Created in the early 1500s, the piece is breathtaking, but expect to pay around 6€ to see it. Next, we were off to the Markt for lunch and were happy to see that an actual farmer’s market was set up in the area that morning. Having only one day in Bruges, we decided that seeing the rest of the attractions from the outside was better than seeing only a few from inside. Stop by the Belfry of Bruges (in market square), Basilica of the Holy Blood (claims to have a vile of the blood of Christ), Bruges City Hall, and (my favorite) Old St. John’s Hospital. St. John’s Hospital is from the 11th century!!!! Pictured behind me in the photo above, it’s one of Bruges’ most iconic buildings. Also, Bruges has a museum dedicated to frites (french fries) that *allegedly* has the best frites in town. 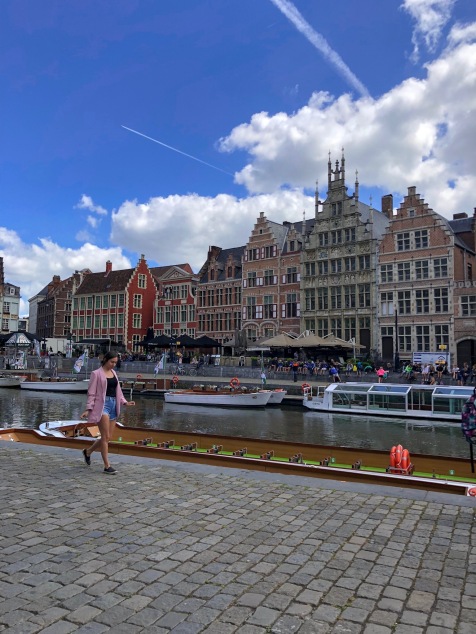 And on Day Three, we traveled to Ghent which is just as medieval and charming as you can get. For some reason, I always find myself in particular cities surrounding by masses of children on field trips. This was one of those days. Ghent is a mere 30-minute train ride from Brussels, but you’ll need to take a tram/bus into old Ghent because it is a very far walk from the train station. You can buy tickets quite cheap at little kiosks or inside at the information desk. Our first stop of the day was Gravensteen Castle, which reminded me a lot of King John’s Castle in Limerick, Ireland. The best part of the castle is reaching the top and seeing all of Ghent below. Next, it was time to explore the checklist of churches and landmarks including St. Bavo’s Cathedral, Belfry of Ghent, St. Nicholas’ Church, City Pavilion, and the Old Post Office. In St. Bavo’s Cathedral you’ll find the infamous Ghent altarpiece, but you’ll pay an additional fee to enter the secret special room its kept in. There is no photography and I recommend purchasing the audio guide to hear the history and explanation of the artwork.  After touristing for a while, my mother ran into a bakery while I grabbed a Nutella waffle. I genuinely have dreams about this waffle to this day. Street waffles for. the. win. Post waffles, I was feeling quite full but was determined to find Graffiti Straat for a photo op. Just going to warn you that it is tucked down a random alley and you will 100% think you’re in the wrong place. We ended our day wandering Graslei and Sint-Michielsbrug Bridge.

Brussels was our “home base” during our stay in Belgium and we spent every night wandering the streets surrounding Grand Place. We visited just about every chocolate shop in town and made sure to drink our fair share of Delirium beer. Watching the Belgian national team in a World Cup game inside a bar filled with locals was probably my favorite moment of the whole trip. I also loved the Delirium Cafe, which is kind of hard to find but so worth it. The Mannekin Pis statue was wearing a Belgian soccer uniform during our visit. Another great stop is the Royal Gallery of Saint-Hubert, an indoor upscale mall that is beautiful. Lastly, during one of our walks, we found the Mont des Arts park that overlooks the city. It was a great view during the day and I wish that we would have ventured back for the best sunset view in the city. There are chairs set up specifically for sunset watchers and there’s even a bar so you can grab a Delirium, sit back, and relax.