STORIES FROM MY TRAVELS

I have just returned from an incredible week in Croatia, having spent half my time in Split and half in Dubrovnik- its time to recap!

We fly New York – London – Split and landed around mid-day. The taxi ride from Split Airport into town cost 360 Kuna (roughly $54). Our AirBnB was roughly a 10 minute walk from the main drag of town. The host spent time explaining different restaurants and attractions over a map before leaving us to a very clean studio apartment. We had scheduled spa appointments for fish pedicures, massages, and facials for 6 PM. The fish pedicure is exactly what it sounds like: you submerge your feet in a fish tank allowing fish to eat the dead skin off of your feet (I chickened out as I have extremely ticklish feet, but my friend really enjoyed it)! After our spa trip, we made our way into the old town for dinner. When I travel to a new place, I have two approaches towards finding restaurants: going to restaurants that come highly recommended or wandering the streets until I see something that looks good. Tonight, we wandered and ended up having the best meal of the entire trip (Restoran – Konoba Favola). Post dinner called for a bottle of wine drank sitting along the Riva people-watching. A quick gelato stop on the walk home ended our first night in Croatia!

Day 2: Full day on the Adriatic

Every trip to Europe must begin with a good croissant, and this trip was no different. On our walk from our AirBnB to the ferry dock, we stopped at Bobis Bakery (SO GOOD) to load up on croissants before our long day at sea. We had booked our catamaran trip through Viator prior to coming. After researching many tours, we went with Summers Blues (about $100/person) because it involved three swim stops, a tour/leisure time in the quaint island of Hvar, food (sandwiches, salads & apple pie) and alcohol (beer and wine) for the entire day. Our boat left the dock around 9:30 AM and returned around 7:15 PM. Some excursions also went to the Blue Lagoon or Golden Horn, we ultimately decided that Hvar was more our speed. I highly recommend this sailing company as the entire crew was kind, attentive and, most of all, fun! After our day at sea, we quickly changed at our AirBnB and headed out to make our 8 PM reservation at Zinfandel Food & Wine Bar. Zinfandel consisted of an incredible cheese board, a bottle of wine, and a great live musician (10/10). We ended our first official day with by strolling through the streets shopping. 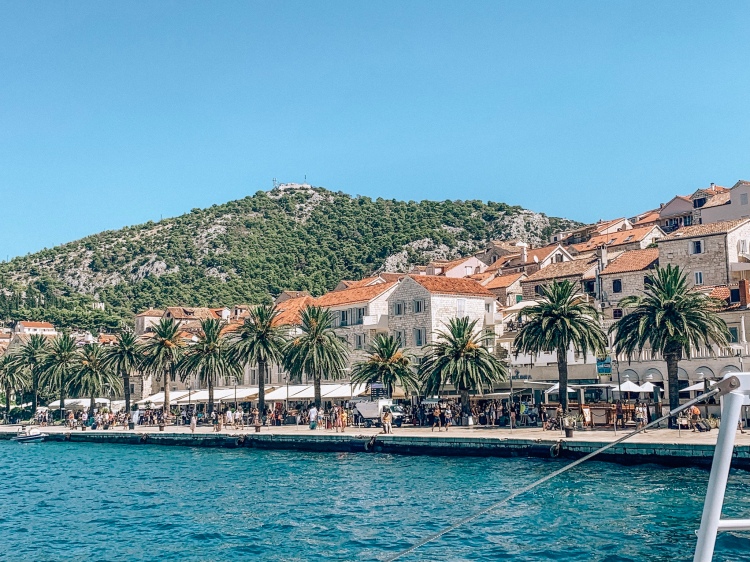 To start our third day in Croatia, we went to a fresh juice stand along the Riva for acai bowls. Post acai bliss, it was time to catch our bus to Krka National Park. We had prebooked this excursion on Trip Advisor for $34.60/person. The “excursion” was just transportation to and from the park (over an hour each way) and did not include entrance into the park (~$22.50). The walk to the waterfalls from the bus takes around 20-30 minutes, but is an easy trek. The waterfalls themselves are breathtaking. At the waterfalls, there lacks an organized place to keep your things (few lockers exist and can be rented from restaurants), so we decided to leave our clothes and shoes on a bench and take all our valuables in the water with us in the neatest waterproof fanny packs. Neither one of us chose to bring water shoes, so let’s discuss this dilemma: we wanted to carry as few things as possible, but the rocks were VERY slippery. I’m not sure water shoes would have helped with the slippery-ness, but they would have protected my feet from cuts (which hurt), would have kept my feet clean from dirt, and potentially (if they had grips) could have saved me from a few falls. There were loads of little food stands by the falls to grab lunch, a beer, or ice cream. Our bus picked us up four hours after dropping us off, which was a perfect amount of time to spend at the falls.

After our excursion, we regrouped in our AirBnB before setting out for a sunset picture over Split. The best view of Split is located up the mountain and takes many a stair to reach. After we were properly sweating, we heading directly back down the mountain for dinner, again wandering until we found a spot we liked. Post-dinner called for a visit to Grgur Ninski Statue (Gregory of Nin) to rub his big toe to bring good luck! As it was our last night in Split, we decided to sit at a cocktail bar and people watch. The night ended with another gelato for the walk home.

Day 4: Off to Dubrovnik

And on our fourth day- we were off to Dubrovnik! There are two ways to get to Dubrovnik from Split: bus or ferry. I have heard that the bus option is rather beautiful (& cheap), but during busy season, it is likely that the bus will end up stuck in traffic for potentially hours on end. For this reason, we opted for the 7:40 AM ferry to land us in Dubrovnik around 12 PM. The ferry ride stopped multiple times, but allowed us to eye-up some islands we didn’t have time to visit and cost $32/person for a one-way ticket. There were a ton of taxis waiting at the dock when we arrived, so we hopped in one and were off to our second AirBnB. Our AirBnB was situated just above town offering both views and convenience. After dropping off our bags, we scurried down the steps to Old Town. A pizza split at lunch was followed by hours of wandering through the very charming (and crowded) streets of old Dubrovnik. Our favorite place in the old town was the Old Port (shown below), where there were restaurants, views, ferries to Lockrum, and swimming around the corner. When the heat had begun to exhaust us, we decided to hop into the Franciscan Monastery (100 kuna or $15) for some air-conditioned education on the history of Dubrovnik. Rejuvenated, we spent the rest of the day exploring (& looking for gelato).

There’s a quaint little swim spot right around the corner from the old port, hidden from tourists thus making it the perfect place for locals to take a morning dip. We decided to start our day by doing just this. It is much calmer and less crowded here than at the city beach, so much so, that we didn’t even venture to check out the city beach. This spot also offers cliffs to jump off that aren’t scary high, but will still fill the veins with adrenaline. After our swim, we walked over to the dock to catch the ferry over to Lokrum (150 kuna or $22.50 for a roundtrip ticket/island entry). The ferry makes the 15 minute trip every half an hour with the last ferry back to Dubrovnik at 7 PM during peak season. On the uninhabited island of Lokrum, you’ll find a nude beach, peacocks and rabbits roaming freely, a monastery, a “dead sea”, restaurants and an actual Iron Throne used in the GoT series. The island of Lokrum was once occupied by the Benedictines, who left in 1808 leaving a curse on the island that anyone who dares to take the island as their own will be damned. No one has successfully occupied the island since, however, in recent years, the island has become Qarth in the Game of Thrones world. The island is also home to the incredible photo location from the picture below, though it is not easy to find/climb to.

We spent a few hours at the island before heading back to Dubrovnik, grabbing lunch, and ultimately, taking a quick nap before our next adventure. Upon arriving in Dubrovnik, we hadn’t made any tour/excursion bookings like we had with Split. Once we prioritized everything we wanted to do, we decided to book a sunset kayak tour for this evening. The tour, through World of Kayaks, lasted roughly three hours and cost approximately $29/person. Our guide Blaze offered two different options for the route depending on how strong of a group we were. We collectively opted for the shorter trek that had us kayaking across to the island of Lokrum before heading to the big cave. At the big cave, we were given time to swim, cliff jump, and more importantly, catch our breath after an exhausting journey. As two fit 23 year-olds, this tour was quite difficult kayak-wise as the sea was very rough (but very worth the sore shoulders the next day). The tour also included sandwiches and wine! Our guide took a special liking to us and gave us a full bottle of wine which we quickly smuggled out of the scene of the crime. Post-kayaking called for dinner and a trip to the Irish Pub Karaka. I have this weird thing where I visit an Irish Pub absolutely everywhere I go and it never disappoints.

For our final full day, it was time for a Game of Thrones walking tour. Our tour was through Dubrovnik Walks, lasted a little over two hours and cost about $22/person. We were able to book this last-minute through Trip Advisor. This particular tour started with the fortress followed by the streets of the Old Town. The fortress is an additional entry fee (50 kuna or $7.50), but it was free if you had already purchased a city wall ticket and could show it. On the flip side, we showed our fortress entrance ticket to the booth at the city wall and were able to have our ticket price reduced. Our guide Branko was incredibly knowledgable and gave a wonderful tour. I will warn you that there are plenty of stairs involved in the tour as it is the only way to access the fortress. The tour ended with a photo-op on the Iron Throne (not a real one used during filming), and we were off to lunch.

After lunch, we headed to walk the City Wall, which is approximately 2 kilometers, a lot of stairs, and bloody miserable in the midday August heat. Entry to the wall will set you back around 200 kuna ($30). Along the wall, there are little stands selling water, gelato, etc., but as you continue walking, the price of water increases (just when you need it most)…. lovely. The walk is quite beautiful and offers wonderful views, however, I highly recommend doing this activity first thing in the morning. Gelato was next on the agenda, as we were both exhausted, hot, and tired. Naturally, a nap and shower followed the gelato.  Our final activity was taking the cable car up to the top of the mountain for the best view over Dubrovnik. The cable car was a pretty smooth ride and held around 30 people (a roundtrip adult ticket costs 170 kuna/$25) The ride itself was very pretty, and the view at the top was even better. At the top of the mountain, there is a restaurant, a few shops, countless photo spots, and buggy rides. There is an option to hike the mountain, but I think that it would take a few hours to complete (also not the best idea in the heat). We ended our final night as we did most other nights, a nice dinner, wine, and shopping through the charming streets of old Dubrovnik. 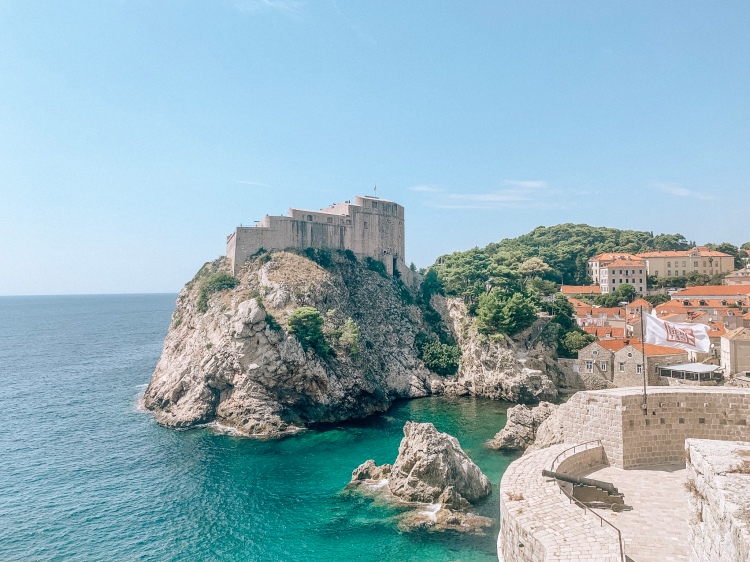 4 thoughts on “Croatia: Split to Dubrovnik”